Do You Have To Say Goodbye To Beloved Pets In A Divorce? 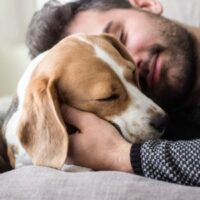 Even though you may be more than ready to say goodbye to your spouse after an unhappy marriage, is the thought of saying goodbye to your dog giving you heartache?  If you’re like many Americans, your pet is like a child—and you cannot imagine life without that wiggly bum and wagging tail.  So what are your chances of keeping your dog in the divorce settlement?

Americans Fight for their Pets

With increasing regularity, disputes over the family pet are making their way into divorce negotiations.  According to a survey by the  American Academy of Matrimonial Lawyers (AAML) nearly one in three divorce lawyers have seen an uptick in the number of cases bogged down by the issue. Not surprisingly, the majority of these conflicts—90 percent– center around the family dog. Cats and other animals make up the other 10 percent of conflicts.  Even exotic animals like a python, a 150-pound turtle, and an African parrot have been involved in these custody battles.

Although it’s not always a successful maneuver, sometimes when one individual knows that a pet is beloved  by their adversary in a divorce, the pet is used as a bargaining chip in order to get the upper hand in settlement negotiations. In many situations, though, both individuals have a genuine affection for the pet, and neither can bear the thought of losing it. One story reported in Reuters involved Joseph and Formosa, both of whom refused to give up on their pet.  Formosa said the thought of living without her dog was devastating, while Joseph lamented that life without his dog was “the worst feeling in the world.”  How did the Delaware court settle the issue?  Each “parent” was awarded six months of doggie custody, a happy ending all around.  Unfortunately, things may not be quite so easy in Florida.

The Legal Case in Florida

Florida law is not written with a view of pets as anything other than property.  Negotiating who gets the animal is not unlike arguing over a chair or a painting.  In other words, from a legal standpoint, there’s little, if any precedent to view your pet outside of the economic considerations common to all marital property. Just like your other assets, your pet will likely be part of an equitable distribution settlement based on its value in dollars and cents, not on its value to your emotional well-being.  The only thing the court really has to do is determine whether the pet is marital property or if it belonged to one or the other of you prior to marriage, making it individual property.

A Real Issue for You

Although the courts may not see it this way, at WiseLieberman our Boca Raton divorce lawyers understand that pets can be a huge issue in a divorce.  We promise to listen to you and fight to achieve the best possible outcomes in your divorce settlement.  To discuss the particulars, contact our office for a confidential consultation today.