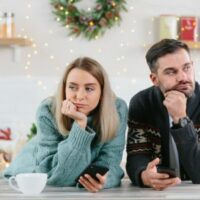 Here comes January, and the ugly business of filing for divorce is becoming an obsession for many Americans. The numbers tell the story: divorce rates rise more than one-third after the holidays. Some note that the New Year’s resolution divorce sprouts up every January. Why the escalation at the first of the year?

After agonizing through an unpleasant holiday season, some people are anxious to start the new year with a clean slate. Generally, people have been mulling the idea for many months, possibly even years. They have reached the point where they just want to shed all of the unhappiness and start over with no baggage. There are situations in which people actually get the ball rolling in November or December, but refrain from telling their spouses until after the holidays are behind them, in an attempt to avoid annihilating Christmas for their spouses and kids. However, there are sometimes a few spiteful, mean- spirited spouses who are more than delighted to drop the bomb in December in order to experience the added bonus of ruining Christmas for them. Mercifully, those situations are rare.

What is it About the Holidays?

So why are the holidays such a precipitous time for marriages? For some whose marriages are already on the rocks, a feeling of being disconnected during the holidays can push them over the edge. Conflicts between couples can be aggravated by amplified expectations from in-laws, friends, and family. When things are already bumpy, financial troubles can become the straw that breaks the camel’s back. Especially when couples have different ideas about the ways in which money should be spent, money can become a huge source of conflict during the holidays.

While many individuals purport to be completely blindsided by their spouse’s wish for a divorce in January, there were likely warning signs that were disregarded long before divorce became the chosen option. Were there any conflicts that had been steeping for a while? Had communication become routine, impersonal, and bland? Had your sex life fizzled? Had discontent become such a way of life that you didn’t even notice it anymore, let alone address it? For couples who have simply been going through the motions for a while, maybe it does come as a surprise when one partner wants to call it quits. But the absence of wretchedness, after all, is not the same thing as joy. Couples who have taken one another for granted for too long may find a divorce in the cards come January.

If you are one of the thousands of Americans who are no longer content with just surviving day after day in an unhappy marriage, it is important to have an experienced local attorney representing your divorce needs. The Boca Raton divorce lawyers at WiseLieberman are prepared to attend to your goals. Schedule a confidential consultation office today.