What Happens When You Spring a Prenup on Your Future Spouse at the Last Minute? 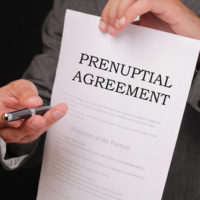 This is the type of scenario you might associate with a soap opera: A couple is facing their wedding day. Just before the ceremony begins, the groom presents the bride with a prenuptial agreement and insists she sign it. The bride feels blindsided but decides to sign the agreement and go through with the marriage anyways.

Such scenarios do occur in real life. But when they do, the party who sprung the last-minute prenup often finds that a Florida judge will not enforce the agreement. Florida law expressly declares a prenuptial agreement is “not enforceable” if one spouse can prove the other obtained consent through “fraud, duress, coercion, or overreaching.”

Here is a recent case where a judge did in fact invalidate a prenup on such grounds. In Ziegler v. Natera, a husband and wife married in 2011 in Venezuela. Less than a week before the wedding, the groom “presented the wife with the draft of an antenuptial agreement,” according to court records. (Antenuptial means the same thing as prenuptial.)

As you might expect, the proposed agreement heavily favored the groom. Under its terms, the wife would receive no alimony or an equitable distribution of property if the couple divorced. Indeed, the agreement did not even fully disclose the nature and extent of the groom’s finances.

The day before the wedding, the groom threatened to cancel the ceremony unless the bride signed it. The bride was pregnant with the couple’s second child at the time. The groom also told the bride that if the couple failed to marry, it would affect their plans to move to the United States. Under these conditions the wife “reluctantly” signed the prenup.

A few years later, the now-husband filed for divorce in Miami-Dade circuit court. The wife argued the prenup was invalid as it was signed under duress. She also noted the husband never made a full disclosure of his finances, as required by Florida law. The circuit court agreed with the wife and invalidated the agreement.

On appeal, the Third District declined the husband’s request to reinstate the agreement. The appeals court found this to be a textbook case of coercion. That is to say, the husband presented the wife with a prenuptial agreement, did not give her adequate time to seek her own counsel to review the document, and then resorted to making a “wrongful threat” in the form of an ultimatum in order to obtain her signature.

Get Advice from a Boca Raton Family Law Attorney Today

The lesson from this case is not that prenuptial agreements are inherently bad or that they cannot be of mutual benefit to a married couple. Rather, it is that a prenup must be treated like any contract in that both sides need to act in good faith and, preferably, with the assistance of their own independent counsel.

If you need advice on how to deal with a potential or existing prenuptial agreement from an experienced Boca Raton family lawyer, contact WiseLieberman, PLLC, today to schedule a consultation.