When Your Spouse Is Hiding Assets In Divorce 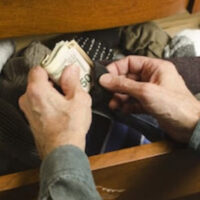 Do you suspect that your spouse has a lot more money than the paperwork in your divorce reveals?  If so, there’s a pretty good chance you’re on the right track.  The National Endowment for Financial Education reveals that nearly a third of people who have joint assets report that they’ve been deceptive about those assets.  About two-thirds of women and nearly half of men complain that their partner was dishonest about financial matters, and nearly 60 percent of individuals surveyed stated that they, themselves, had hidden cash from a partner. Over half of people admitted to hiding purchases from their partners, and about one-third had hidden a bill from their partners. All of this occurred while couples were still together.  Imagine the lies that occur when divorce proceedings are underway!

Unfortunately, many people attempt to defy the law and sneak away with undisclosed assets when they divorce.  Not only is this behavior unethical; it’s downright illegal.  Hiding and/or disguising assets in order to avoid splitting them in a divorce is nonetheless not uncommon.  Some unscrupulous tactics that may be attempted include:

A Financial Affidavit must be signed in a contested divorce.  In it, your spouse swears to truthfulness about the assets, debts, income and expenses being reported.  All financial material must be revealed, even if there was no specific question about a particular issue.  For example, even if not questioned about retirement plans, facts relevant to retirement plans must be shared.  To be clear, the devil is in the details of this document.  “Accidently” failing to report information is actually perjury, so anything that looks fishy should definitely be investigated by your divorce attorney.  What are the consequences for hiding assets?  The possibilities include charges of perjury or fraud, in addition to contempt of court.  The court may also force the offender to pay your fees associated with uncovering the fraud, and may even invalidate any signed prenups.  Your ex may face fines, restitution, and time behind bars for lying. And if you don’t discover the fraud until after the divorce is finalized, you can still go back to court to reopen the settlement and file civil charges against your spouse.  You can potentially get monetary and punitive damages at this point.

Looking for an Experienced Divorce Attorney?

If you need an aggressive divorce attorney who is willing to leave no stone unturned in the search for financial clarity, you’ll be happy to know that at WiseLieberman, our Boca Raton divorce attorneys will go to the mats for you.  Contact us for a confidential consultation today.